The most surprising thing about living in Tokyo is how often you can forget that you’re living in a city of more than 13 million people. High-profile locations like Shinjuku and Ginza and Yoyogi are only one aspect of the prism. Most of Tokyo is a series of neighbourhoods that feel surprisingly contained, where people just live ordinary lives.

Early last year I was cycling home after work one night, and the man who runs the hardware store by the station was packing things away out the front of his shop. He glanced up, dropped what he was holding and called out to get my attention. I screeched to a halt (literally – my brakes needed some work) and tried to understand what he was saying.

“You bought the saucepan and broom and baguette last month, right?” he said. Actually he didn’t say baguette – I remembered later I’d bought a bucket, which sounds almost identical in Japanese, especially when you have no idea what’s going on.

He was saying something about money. He hurried inside and retrieved a little plastic bag holding a calculation on a slip of paper and some cash, at which point it all became clear – he’d overcharged me ¥1500 and for the past month he’d been holding onto the change, waiting for the chance to correct the error.

In this most populous city in the world, people live in their tiny apartments and narrow townhouses, and take their kids to the local kindergarten, and shop in the closest supermarket, and ride the same train to work, and it’s possible to see the same people around and maybe make friends with some of them. You can forget the city you’re in. Soon after I’d moved here, I was living 30 minutes west of Shinjuku, frequenting just a couple of neighbourhoods for study and work. And one day I went to the top of Tokyo Tower and looked out across the city and saw the expanse of flat-topped buildings squashed together, the occasional temple or park or stadium breaking it up, spreading to the horizon like a little Lego city. I realised then how small a part of the city I had been occupying. Two years later, I often still feel like I am just scratching away at the surface, getting a little deeper and finding more threads to tie together each time I head out.

One reason it’s easy to spend your life here in only a few places is that there is so much packed into each small area. There are six drycleaners on that same shopping street. Six. About as many fruit and veg sellers. Small, neat gardening shops, the odd bar, Italian and French and Indian restaurants, a coin laundry, a couple of electric appliance stores, a record store, ramen shops, convenience stores, a second-hand furniture store. An old woman sells mochi from her storefront, behind which can be seen a big shadowy kitchen. There is a ballet school. A YMCA. Medical clinics and dentists. That’s just off the top of my head and the street’s only about a kilometre long.

But if you look above your head and below ground you find that there is even more. Coming from a mostly ground-level country with neatly separated buildings, you eventually learn that if you can’t find that yakiniku place that the map says is here, look up – it’s probably on the seventh floor of that narrow brown building you’ve walked past twice. If you’re looking for somewhere to eat in the business district, go underground; there’s a rabbit warren of restaurants and shops down there. One warm summer night, Ian and I decided to spend the evening around the station. We started at an old-school kissaten coffee shop with faux-European shutters and lacy curtains that smelled of cigarette smoke thanks to the unenclosed smoking section. Like lots of these old cafés, the pleasure comes mostly from feeling like you’ve stepped back a few decades – and occasionally from a reasonable drip coffee or a pineapple parfait. After wandering about some more we decided to explore a basement that I’d never ventured down into. Half a dozen restaurants were hiding down there, and we ended up at a tiny Kenyan place. And when I say tiny, I mean tiny. Four, maybe five, seats were squeezed in between the sliding glass door and the counter, behind which a chatty Kenyan woman welcomed us, switching into Japanese for her other customer – who it turned out could also speak Swahili and English – explaining the menu, telling us where she buys her lamb chops, recommending a chilli and garlic condiment that nearly blew my nose off, and telling us how she came to marry a Japanese man and move here 25 years ago. We left later than planned, marvelling that we’d walked around here so often and never known that under our very feet there was a Kenyan woman cooking up nyama choma.

The neighbourhood feeling engendered by such close proximity is something I will miss now that I’ve experienced it. It means there is a frisson of life in the most ordinary of errands. It means a certain familiarity in a city that very easily lets you be anonymous. 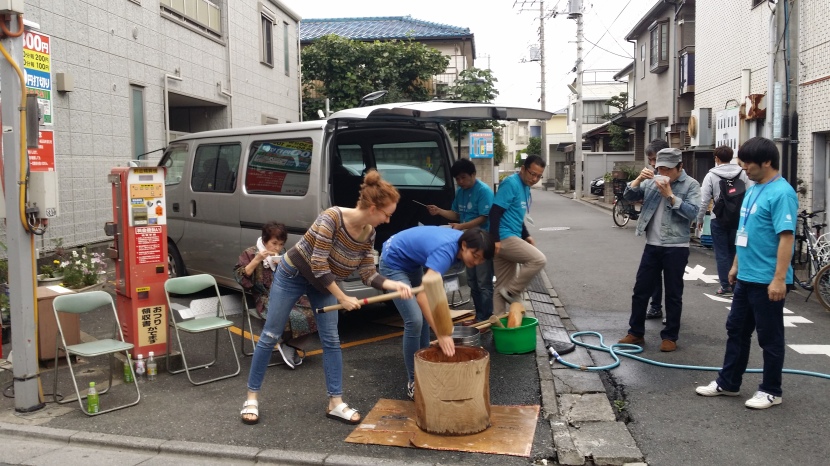 Maybe this is deceptive, though. It can make you feel like you belong – and maybe you kind of do – but for all of the formal politeness, reflexive kindness and genuine friendliness (yes, friendly; it’s not a word that usually springs to mind when we talk about Japanese people, but they are so often warm and chatty), hospitality doesn’t extend to the home all that often. This is partly because of a lack of space in many cities. As someone who lives in a 30-square-meter apartment with two chairs, I sympathise. I look forward to the day when I can once again invite more than one person over at a time.

But I reckon it’s also the strong sense of privacy. Rent inspections are not a thing here. My friend Ibuki tells me that when she moved to Australia she was shocked to learn that a stranger would regularly coming into her home to look around. I guess that is a bit weird, I thought to myself for the first time.

What this closely guarded privacy means is that for special occasions, people go to restaurants. And restaurants oblige. It’s the easiest thing in the world to reserve a private room for 20 with a set course meal. A work colleague wanted to organise a movie night. In Australia, we’d see who could offer up their lounge room and flat-screen for the evening, but lacking this option, she hired out a function room set up with couches and tables, a wall-mounted TV, a karaoke set and a DVD player, and a banquet style dinner was delivered as we watched Murder on the Orient Express. There are whole buildings dedicated to such “party rooms.”

But I’ve started to feel like this tendency to meet outside the home – whether coincidental or intentional – maintains a certain distance. To invite someone into your home is to open your life up to them a little. It’s relaxed in a way that no restaurant party can ever be. It peels back a layer between you and your guest.

I recognise that I see things this way because of the culture I grew up in, but it seems common to Westerners. A few months ago, we ran a story in the paper I work at about the growing popularity of “home parties.” The Japanese article we were translating reported that, wanting to save a little money, relax and enjoy making themed table settings, women are – wait for it – inviting their friends over to their houses to celebrate birthdays or special occasions. My fellow foreign colleagues and I looked at each other in bemusement. “Isn’t that just … a party?”

But for all this, the Japanese do know how to have a good time. You haven’t seen them let loose until you’ve been to a company work party. I love it when summer rolls around because it means throbbing odori dance festivals and drinking ice cold beer on balmy nights.

Despite the heat – or perhaps because of it – when the weather starts to heat up, people relax. Sometimes you walk over to the 7-Eleven on the first really hot weekend in July and there’s a party going on: the staff members are wearing red haori jackets and chequered headbands and handing out free popcorn with every purchase. Outside two others are selling tiny round watermelons out of an inflatable pool filled with ice water. It’s 34 degrees and 81 percent humidity. Of course you buy the damn watermelon. And when the teenage boy selling it to you asks where you are from and what you do, with that combination of politeness and curiosity so often found here, you chat briefly before walking away, watermelon in one arm, popcorn in the other, feeling a little less anonymous.