Take out a map of the world. Look at Russia. See there in southern Siberia? Just north of Mongolia? That long, curved shape – that’s Lake Baikal. Never heard of it? Neither had I, until I was deciding where to stop along the Trans-Siberian route and it kept getting mentioned. A must-see, the online voices were insisting. Don’t miss it.

Baikal is the deepest lake in the world. Six hundred and thirty five kilometres long, a narrow forty eight kilometres wide and 1637 metres deep, it might be more correct to call Baikal an inland sea. Perhaps the fact that it is freshwater maintains its lake status, but this lake holds twenty per cent – you read that right, one-fifth – of the world’s freshwater, so it’s kind of hard to compare it to anything.

After a few days in Irkutsk, that beautiful Siberian city of the Decembrists, I took a minibus one morning to Olkhon Island. I’d booked a few days at Nikita’s Homestead, reportedly excellent accommodation (a report that proved true).

Something happened to my sense of distance after seven months in tiny European countries. Early on I kept overestimating how long it would take to get places (that’s pretty far, I’d think, only to find it’s two hours from London to Brussels) but when I got to Russia I was having the opposite problem. So when I glanced at the map I thought it would take two maybe three hours from Irkutsk to Olkhon. Wrong. Five hours later we arrived in Khuzhir, the village in the middle of the island. I looked more closely at the map and conceded it was a long way.

At this point I still had no more than a few nuggets of information about Baikal. All that stuff about it holding the most water, the fact that it is home to a few unique species (chiefly the omul’ fish) and that it is generally spoken of as magical, this was the extent of my knowledge.

The landscape on the drive from Irkutsk had become increasingly barren. Small mobs of cattle and horses dotted the browning hills and not much else, not even fences (apparently not important in Russian farming). After making a short crossing by car ferry onto Olkhon Island itself, we roared along a dirt road with no sign of human life except a power line on triangular supports running beside us. After arriving in Khuzhir and at Nikita’s, I dropped my bags, wrapped up in my coat and wandered out the back gate of the homestead.

The lake was right there, and immediately I had eyes for nothing else. A hill of brown dirt rolled down to a low cliff and the water stretching away from it was all kinds of blue. Aquamarine in the shallows, dark like sapphire midway out, and misty blue in the distance. Even from up high I could see the stones through the clear water a few metres from the shore. The blues were offset by a couple of larch trees with their brilliant orange branches gripping the cliff edges. I’d never seen a place like it. 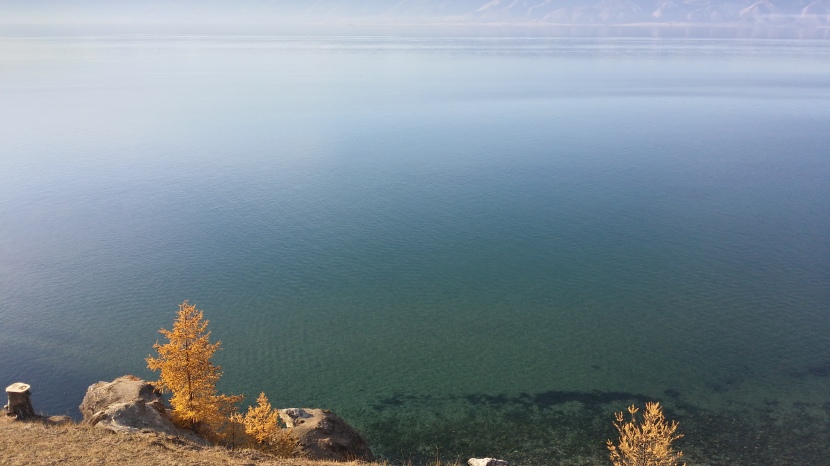 But what struck me most of all was the silence. Even the handful of people taking photos a short distance away didn’t affect it; it was as though the silence was bigger than a simple lack of sound. The next day when I explored further up the coast of the island I was alone and I could not get over this. It wasn’t silent because there was no life. It was deeply quiet. Deeply quiet. Beneath the soft lapping of tiny waves on the shore and barely-there breeze a certain energy hummed. Nothing oracular. Nothing tangible. Just a feeling. It’s easy to understand why certain points around Olkhon Island are marked out as shamanistic – you can’t be in such creation and feel nothing.

That shamanism is an interesting aspect, actually. I don’t know much about it, only that the Buryat people native to this area have an ancient shamanistic tradition, which involves connecting with the spiritual energies of nature. I noticed a number of totem poles covered with bright ribbons, often in high places or particularly beautiful places. Through the translation of a German guy who spoke some Russian I found out from a local that these poles mark places where there is a really strong energy. However, the tying of ribbons onto the poles (or sometimes onto trees) is apparently a Buddhist ritual introduced from Tibet, now incorporated into local customs. Each colour represents a certain type of prayer, and they combine in this brilliant display.

There’s a lot more to Baikal than meets the eye, is my guess, even just in the way Siberians value it. When I told Tonya in Ekaterinburg that I was going to Baikal she gasped excitedly. “I haven’t been,” she said, “but one day I will definitely see Baikal, he is my dream.” (I had heard that Russians have a way of humanising objects and places, and referring to Baikal as “he” is a great example; Ian Frazier in Travels in Siberia also mentions that the word for speed bump in Russian is “lying down policeman”. I love that.)

On the third day I joined a tour to the northern point of the island. It was cloudy all morning as we stopped at certain picturesque points or to pay the national park ranger. But as we jolted towards the tip of the island in our off-road Uazik the sun came out and shone blue on the water. Staring north from the cliff edge it was mind-boggling to think of that water going on for hundreds of kilometres in front of me. So much water stretching over the horizon is something I’ve only ever seen in the ocean, which is salty and windy and crashing. This is none of those things. But it is no less impressive. 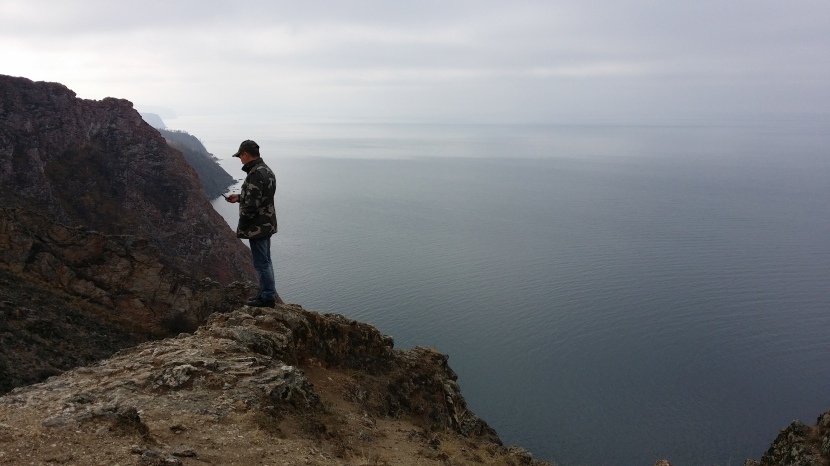 Our driver cooked an omul’ soup for lunch, with cheese and bread and the ubiquitous cucumbers and tomatoes. Outdoor picnic lunches always taste twice as good, especially eaten in a grove of trees on an island in a Siberian lake. On the way home, as we bounced like a box of skittles over the ditches, I mean roads, nobody spoke much. Perhaps, like me, everyone was a little tired, reflecting on the landscape, responding to that deep quiet.